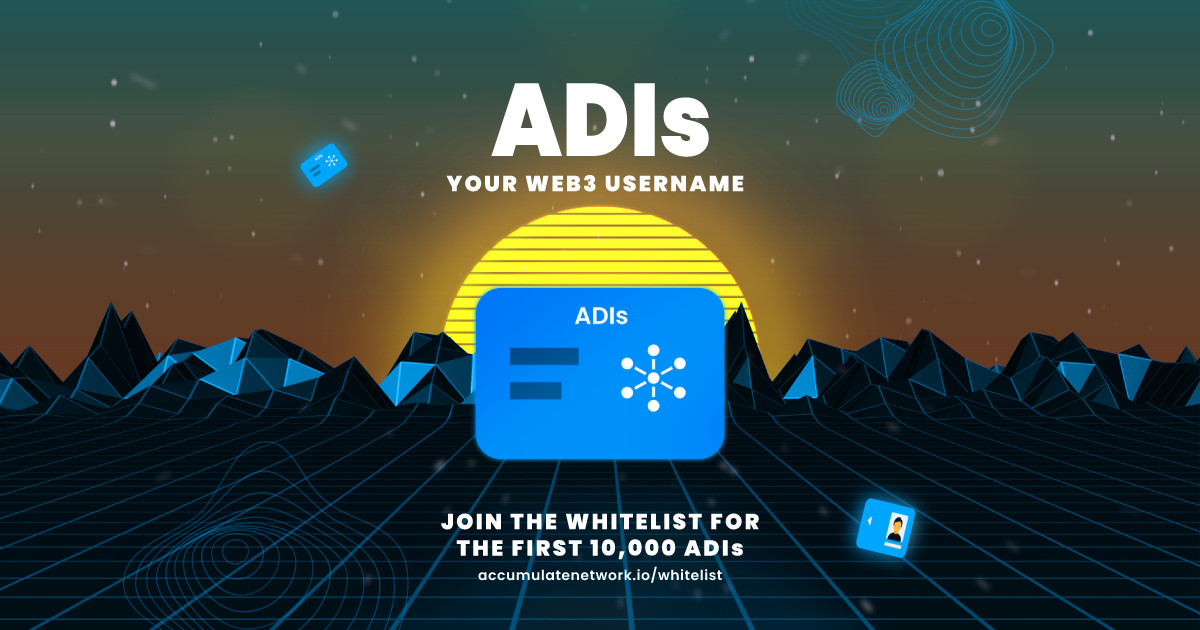 Accumulate is announcing a whitelist for 10,000 Web3 enthusiasts to join in order to gain early access to claim a unique Accumulate Digital Identifier or ADI, which users will be able to use once the Accumulate Mainnet launches.

ADIs refer to a system for assigning unique digital identities to assets, individuals, or entities on the blockchain. Traditional blockchains are organized based on randomly generated public and private key pairs which are used to store funds and record transactions on a distributed ledger.

Current blockchain key management systems lack simplicity for the average user. The common approach of using the first and last characters of an address can leave users exposed to what is called the ‘man-in-the-middle attack’, which is a form of cyber attack where a bad actor could intercept or manipulate a transaction by injecting wrong information or changing the recipient’s address to their own. This is made easier due to the complex nature of randomly generated addresses.

Additionally, due to these addresses being randomly generated, public & private key management systems make it difficult to store ordered data sets or assign different levels of permissions to specific keys.

Accumulate Digital Identifiers (ADIs) are human-readable addresses similar to website URLs chosen by individuals or organizations to represent their presence on the blockchain.

ADIs enable more flexibility and deployment of complex operations by issuing a hierarchy of keys with different permissions or levels of security.

This allows entities operating on the blockchain to more easily build standardized yet scalable protocols for other entities to interact with and exchange sensitive information with them based on access permissions granted for specific data sets.

Using ADIs, Accumulate can serve as the de-facto communication and audit layer between blockchains, enabling the seamless transfer of tokens or other kinds of digital assets between ADIs across different chains regardless of their consensus mechanism.

A key advantage of ADIs is the emphasis on multi-chain interoperability with other digital identifier solutions.

One of the biggest challenges that the Web3 space faces today is the lack of connectivity between the dozens of other blockchain-based identity solutions, each of which is vying for the same goal of achieving a universal identity layer.

A decentralized identity solution is only as valuable as the number of individuals or entities it represents. The smaller the number of adopters of a digital identity format, the less useful each ID will be when it comes to accurately represent the online or offline behavior and reputation of its holder.

The ultimate purpose of a digital identity is to serve as a single source of truth and a standardized form of accounting for all on-chain and off-chain activities that the identity holder has participated in and for all digitally native and digitized (or tokenized) assets that they hold.

Under this description, it is essential that a digital ID be integrated into every Dapp or blockchain that a user has adopted in order to represent that user in the most accurate and complete way possible.

On Accumulate, we aim to enable users who hold an SBT, an ENS domain, or any other form of digital identity to convert them into our ADI format, similar to how BTC can become WBTC by being embedded into a smart contract that converts the token to an ERC-20 token, thereby giving it functionality within the Ethereum ecosystem.

Each uniquely formed identity on a different chain or Dapp could be given an ADI wrapper that would enable it to function as a unique ADI within the Accumulate Network.

Ultimately, enabling interoperability between on-chain digital IDs to create a cross-chain universal identity layer will be one of the defining traits of Accumulate.

Join the Accumulate ADI whitelist today to take part in the next phase of decentralized digital identities.

Accumulate is a high-performance blockchain for DeFi, integrating blockchains, protocols, oracles, and applications, serving as a bridge for the new digital economy. Accumulate shifts the paradigm for how blockchains manage data, tokens, and users with an identity-based, Proof-of-Stake  blockchain offering secure, scalable, and extensible features to power DeFi applications. Learn more at https://accumulatenetwork.io.

#HELLHOUND$ #TheSupremeTeam Artist Name: HELLHOUND$ Who are you? Someone who is a wannabe. Where are you from? Trashy, poor, and grim. How can we follow you? Song Title: DARK TINTS Listen to HELLHOUND$: Source: https://supremepr.us/

Someone who is a wannabe.