Bitcoin Back To 60k: What’s Next For BTC If ETF Is Approved?

Bitcoin is back to levels we haven’t seen since April. Will it last?

Bitcoin Back To 60K 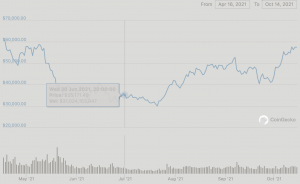 Bitcoin (ticker symbol: BTC) got back to 60k today for the first time since April 17th of this year. BTC is trading in the 60k range, hovering near its all-time high of 64k it set on April 13th.

Bitcoin didn’t have to do much to get to 60k. The world’s first cryptocurrency is only up about 4% in the last 24 hours, and 11% in the last 7 days. Though, even with the meagre 24 hour gain, Bitcoin is still the 4th biggest gainer among top 100 projects.

Top 100 Gainers In The Past 24 hours. Credit: CoinMarketCap.com

Even more impressively, the altcoins in the top 5 are largely Bitcoin-focused, except Polygon and Helium. NuCypher, which is up an absurd 372%, is an ERC-20 privacy-focused project that merged with Keep Protocol back in June in hopes of dominating the wrapped BTC market.

As per always, BTC is number one in terms of market cap. Its total market capitalization of $1.2 trillion USD puts it ahead of its closest competitor, Ethereum, by almost $700 billion dollars.

The consensus for the positive price action is the rumour of an imminent Bitcoin Futures ETF. Many are pointing to October 18th as the announcement date. Though, nothing is certain. So, proceed with caution.

The Long Road For BTC

It was a long road for Bitcoin to get back to this point. About 6 months, to be kind of precise. But it’s not the first time in Bitcoin’s short history where we’ve seen something similar. And by similar, I mean, like really, really similar.

Back in 2013, Bitcoin reached $266 in April, before falling and trading in the $100 range for a while, and then slowly rising back up to a new all-time high in November.

Of course, we are still in October, and BTC isn’t past an all-time high yet. And, if we’re being honest, probably not a good idea to assume anything, lest we forget Bitcoin Day.

But damn, looking at the parallels, they sure look eery.

THAT SAID, the crypto crowd may be overestimating the demand for these ETFs. It's a big step no doubt but we see only $4b in first 12mo (and some think that's too high!) but that's just 5% of crypto fund aum, 3% of bitcoin futures, and 1% of bitcoin mkt cap and 1% of all ETF flow pic.twitter.com/1fALaph1TF

It’s unclear how much a potential Bitcoin Futures ETF will do for the price. After all, some believe it’s already priced in, and others like Eric Balchunas think it might not be that big of a potential market.

“THAT SAID, the crypto crowd may be overestimating the demand for these ETFs. It’s a big step no doubt but we see only $4b in first 12mo (and some think that’s too high!) but that’s just 5% of crypto fund aum, 3% of bitcoin futures, and 1% of bitcoin mkt cap and 1% of all ETF flow,” Balchunas said via Twitter.
Balchunas also pointed out how little business a Bitcoin Futures ETF is doing in Canada compared to the physically backed ETF. Though, Balchunas did point out that Canadians have the option between the two, which American’s won’t.

The post Bitcoin Back To 60k: What’s Next For BTC If ETF Is Approved? appeared first on CryptosRus.

I declare my own interfaces that inherit from OpenZeppelin interfaces. Eg; interface IBase is IERC20Upgradeable, IAccessControlEnumerableUpgradeable { Howvever, in my implementation I can’t directly access the OZ functions abstract contract Mintable is IBase { function mintCoins(uint amount, address to, uint timestamp) public onlyMinter { // We can only mint coins to the TC address hasRole(THECOIN_ROLE,::Listen

I declare my own interfaces that inherit from OpenZeppelin interfaces. Eg;

Howvever, in my implementation I can’t directly access the OZ functions

Instead I have to manually cast, which seems to make the whole inheritance thing pointless

I seem to be misunderstanding something fundamental here. I’ve tried inheriting from the IAccessControl directly in Mintable but solidity can’t work out the inheritance tree – but isn’t that the whole point of interfaces? There is no ‘tree’, because there is no memory allocated?

Any suggestions? Solidity is verbose enough with manually casting every time I need to access a virtual function.

Bitcoin Back To 60k: What’s Next For BTC If ETF Is Approved?