Frederik Gregaard dismissed any notion that Cardano (ADA) is on the back foot, having released smart contracts just five weeks ago.

The Cardano Foundation CEO added that, rather than being handicapped, he thinks this puts the project in a much stronger position because the foundational groundwork to get to this point ensures longevity.

In the run-up to its release, skeptics leveled multiple criticisms throughout this period, including scam accusations, delayed releases, and the slow rate of development roll-outs, which is perhaps the most prevalent criticism.

Inevitably, the main point of reference comes in comparing Cardano to Ethereum. In summing up the situation, IOHK CEO Charles Hoskinson said it all boils down to philosophical differences between the two.

While he added that both projects share a commonality in moving society forward through technology, Hoskinson thinks Cardano takes a more responsible approach, which unavoidably takes more time.

“I just happen to believe the way we do things is a bit more mature and responsible, because the way that we do things results in a better assurance that the systems we build won’t fail.”

Being late to smart contracts

Fast forward to now, and Gregaard expands on Hoskinson’s comment by saying, when it comes to building blockchains, reliability and resilience are the top priorities, not the speed of release.

He added that developing blockchain technology should be thought of as a long game, and getting things right to last for generations trumps any need to be first.

“For me, what is most important is reliability and resilience of the technology, right? But also the ability to use that over generations.”

Explaining why Cardano took so long to get to this stage, Gregaard said the developmental decision to build the computing layer separate from the accounting layer was a major factor in this.

He continued by saying while this system architecture approach may have slowed development and led to being late to the smart contract party, it has huge advantages in offering a simple and secure experience.

Comparing this to Ethereum’s architectural approach, which has both computing and accounting on the blockchain, Gregaard said this method relies on things happening outside of the smart contract. Not only does this introduce complexity with a greater risk of coding errors, but it offers hackers more attack vectors.

The post Cardano (ADA) Foundation CEO says being late to the smart contract party is an advantage appeared first on CryptoSlate.

Obscure NFT collection from 2019 racks up a $100 million valuation

With over 13,000 NFTs in its portfolio, the WHALE Vault was valued at over $100 million in the latest audit published by NonFungible.com. WHALE was launched in May 2020 as an ERC-20 token and is primarily backed by the NFT collection stored within The Vault. Based on market conditions and analysis, the popular NFT market::Listen

With over 13,000 NFTs in its portfolio, the WHALE Vault was valued at over $100 million in the latest audit published by NonFungible.com.

WHALE was launched in May 2020 as an ERC-20 token and is primarily backed by the NFT collection stored within The Vault.

Based on market conditions and analysis, the popular NFT market metrics tracker publishes a valuation of the WHALE Vault on a monthly basis, while accounting for balance and inflow and outflows of NFT assets in the collection.

The collection was started in 2019 by an anonymous investor, known under the pseudonym “WhaleShark,” and includes some of the rarest NFTs from Gods Unchained, Sandbox and Avastars, among others.

The $WHALE Vault, a collection of NFTs that I started in 2019 has surpassed $100 million in 3rd party valuation.

This valuation done by @nonfungibles is based on previous sales and is thus still conservative.

According to the latest valuation report, the Vault value grew to $126,153,559 in November.

Alongside NFTs, which account for almost 90% of the amount, the audit also took in consideration the fungible assets in the Vault, which amount to $8,9 million, as well as $4,2 million allocated in WHALE Liquidity Pool. 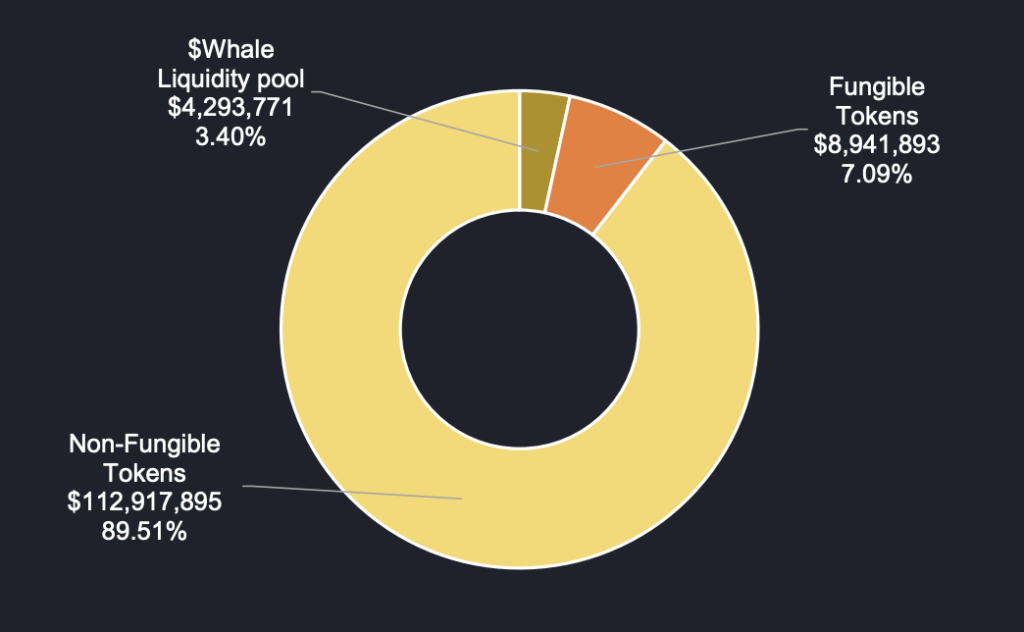 In the meantime, 513 SuperRare NFTs, which make up only 4% of the Vault collection volume, account for $72,7 million.

Despite NFT collectibles cooling down

“While certain projects like the Bored Ape Yacht Club (BAYC) actually saw their value grow, the majority of the NFT collections are in the throes of a downward trend,” read DappRaddar’s monthly industry report.

The popular data acquisition and analysis company noted that the NFT space generated $3,76 billion in trading volume in November, revealing a 15% decrease from October’s numbers.

While identifying that the trading volume of NFT collectibles decreased 16% month-over-month, the report concluded that in November the NFT space, particularly collectibles, entered a “cool down” phase.

During this bearish phase, the WHALE Vault added 56 NFTs, while the collection value increased by an impressive 29%.

The post Obscure NFT collection from 2019 racks up a $100 million valuation appeared first on CryptoSlate.