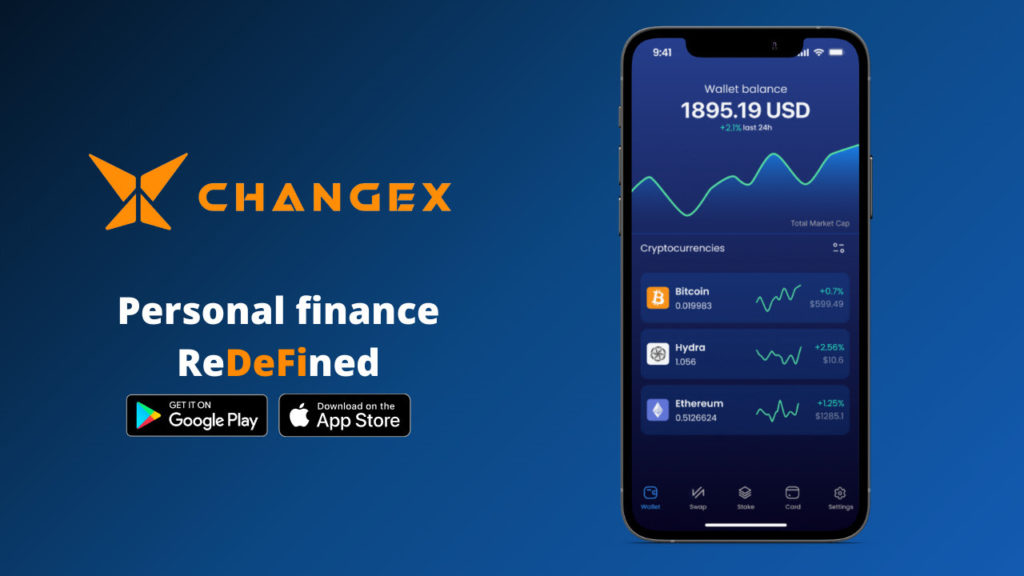 ChangeX, an all-in-one personal finance mobile app, is excited to announce the launch of its native token, CHANGE, to be used trading on HydraDEX and Uniswap.

The token was introduced to the ChangeX app on July 19 2022, with in-app staking and compounding rewards. These rewards will notably be paid out in CHANGE. During the release day, the staking APR was in the 500% range without including the compounding of staking rewards.

While commenting on the launch, Nikifor Iliev, ChangeX’s CEO explained:

“ChangeX is entering a very exciting stage, and we’re very happy with the numbers. We’ve got the app up and running, the token is online and we’ve reached a very important milestone with staking now available. We aimed for a timely release according to our roadmap, and our developers have been working round the clock to reach deadlines and provide the beta version of the app to the community. All this was achieved in less than 6 months, and we’re all very proud of it.”

Notably, the token launch comes after a successful ICO raised $2 million, defying the bear market sentiments.  This funding will reportedly fund the project for the next 24 months, with strong financial support despite the current market conditions. Days after the project’s launch, both iterations have continued to surge, a strong indicator of ChangeX’s integrity and the strength of its community.

In Q3 2022, the ChangeX team is planning on bringing delegated HYDRA staking, allowing users access to full staking benefits without the need to set up a node. In addition, the team is also working on setting up the foundations for ChangeX’s open lending market and flagship leveraged staking product. This product seeks to offer users margin positions on multiple staked assets in the app while amplifying yield by a factor of 1.2 to 2x.

“All the additions we’ve planned for the future in our roadmap complement each other and create an all-in-one app ecosystem that works on interoperability and simplicity. The end goal is a smooth and user-friendly app that offers unprecedented ease of access to DeFi, crypto, and traditional finance.”

The Cryptocurrency Industry Has A Problem: There Aren’t Enough Women

A recent Pew Research Center survey found that only 19% of women aged 18 to 29 invest in cryptocurrencies, compared to 43% of men in the same age group. However, the disparity in representation in the cryptocurrency and blockchain industries dwarfs these figures. According to a 2019 report, the proportion of women working in those::Listen

A recent Pew Research Center survey found that only 19% of women aged 18 to 29 invest in cryptocurrencies, compared to 43% of men in the same age group.

However, the disparity in representation in the cryptocurrency and blockchain industries dwarfs these figures. According to a 2019 report, the proportion of women working in those fields—including as developers, investors, and casually interested people—hovers between 4% and 6%; at least 94% of the workforce is made up of men.

This is a big issue: An industry’s infancy is frequently when fortunes are made. The direction the industry takes in the future—from whom to invest in to what to build next—is commonly influenced by those big winners. According to experts, now is the time for women to make their mark on the crypto industry and its future because their absence could eventually lessen their influence and advantages.

“It’s vital for women and femme-identifying people to be a part of crypto and blockchain right now because we’re building the next generation of the financial ecosystem to replace the traditional system, which is in a state of decline as legacy (non-blockchain) systems become outmoded,” says Natalie Demary, Co-founder and CEO of CryptoFemme. Her organization and budding DAO (decentralized autonomous organization) seek to educate and bring more women into crypto. “Crypto and blockchain came from finance and tech, and those industries traditionally don’t have a high representation of women. We’re trying to change this.”

“Crypto is a world that moves fast with many voices and opportunities within the space,” according to Mel Perry, Co-founder and CVO (visionary officer) at CryptoFemme. The good news for women is that there’s still plenty of opportunity for those inspired to create a career for themselves, thereby shrinking the space’s diversity gap.

Women can’t afford to put off learning about cryptocurrency and determining whether it fits into their financial strategy and risk tolerance, according to growing groups of artists, coders, entrepreneurs, and investors. These women are making their mark on the industry without waiting for an invitation and doing everything they can to encourage other women to follow suit.

By offering education, mentoring, and a community appropriate for all experience in cryptocurrency, but especially for newcomers and the crypto-curious, CryptoFemme is attempting to close the gap for all of these individuals and groups of women. Because cryptocurrency is the future and women are the future.

The CFC (CryptoFemme Collection), their flagship product, is a primary beginner-level education and mentorship programme. It consists of six week-long crypto masterclasses courses that cover the background of crypto, why it was developed, how it functions, how you can use it, and best practices for privacy, security, and profitability, among other topics. Join the community here to find out more about the programme as well as other events, tools, and resources for women and people who identify as a femme who have all levels of crypto experience.