This week, we take a closer look at Ethereum, Ripple, Cardano, Solana, and Ethereum Classic. 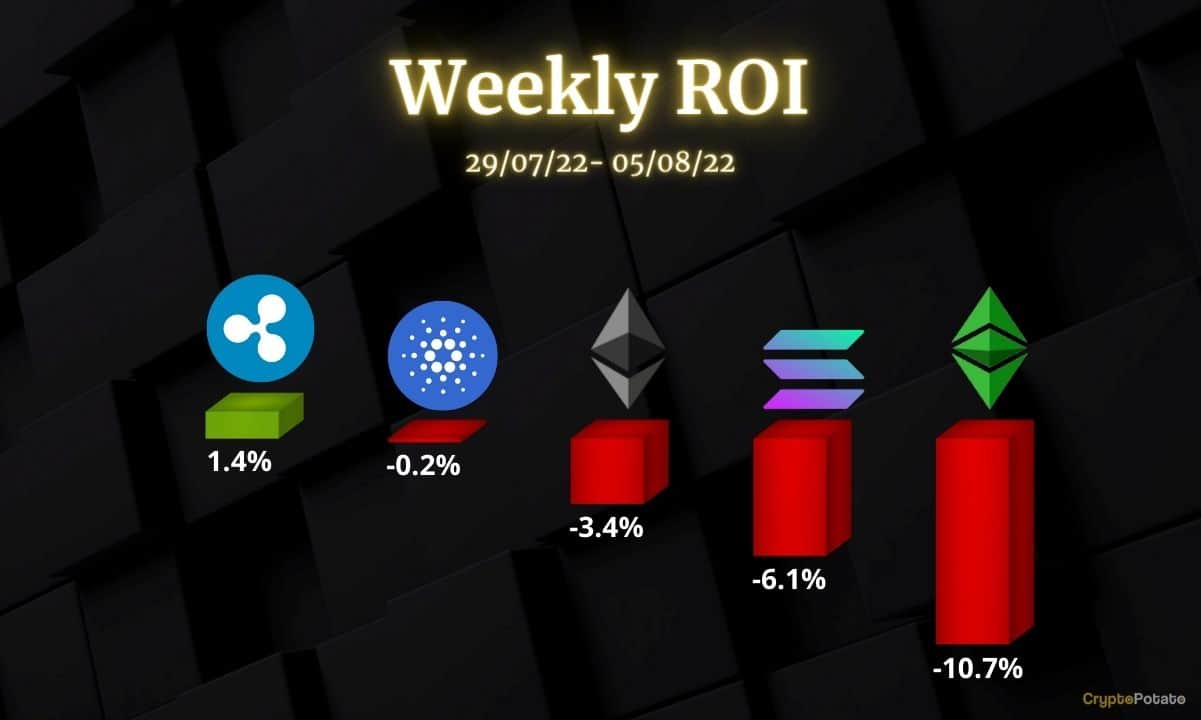 After a significant rally, Ethereum seems to have found a local top above $1700, which has so far acted as strong resistance. The price did not manage to move beyond this level and fell by 3.4% in the past seven days. The key support is found at $1,400.

Despite the ongoing pullback, Ethereum still managed a very strong performance since the bottom in June. Even if the price falls to the key support, the expectation is that buyers will return to the market and attempt a breakout beyond $1,700. The key support at $1,400 can act as a reversal point to trigger the next leg up for the cryptocurrency.

The indicators show some weakness right now on the daily timeframe, but the sellers are not very convincing. This shows that buyers may return in force again to take ETH above the current resistance and even towards $2,000.

Ripple has not managed to break free from the key resistance at $0.38 despite several attempts. There was a massive wick on July 30th that went above this critical level, but the bears quickly pushed it back down. For this reason, the price action for XRP has remained relatively flat in the past seven days with only a 1.4% increase.

While the indicators remain bullish, the volume does not bring enough confidence that buyers will manage to break free from this range. With the approaching weekend, it is unlikely we will see a breakout unless the market leaders (BTC and ETH) attempt a significant rally.

Looking ahead, XRP fans will likely have to accept more sideways price action until a clean breakout takes place that will turn the key resistance at $0.38 into support. Until then, XRP may continue to move within this large channel between $0.38 and $0.30.

Cardano continues to struggle below the $0.55 resistance. Multiple attempts failed to produce a successful breakout, and this has kept the price relatively flat below the important level in the past seven days. The support levels remain at $0.50 and $0.45.

Looking at the price action, we can see that ADA did manage to make higher highs and higher lows which places the price in a clear uptrend. Therefore, another battle between bulls and bears in the days ahead at the key resistance seems likely.

While the volume is not great right now, buyers may attempt another breakout next week. The indicators such as the MACD and RSI remain bullish despite the most recent pullback. This could build up into a strong upward momentum if buyers remain interested.

There is finally some good news for Solana. After suffering a market downturn due to the most recent exploit of some Solana-based wallets, the price managed to find support at $40 and avoid a breakdown below the ascending triangle. Nevertheless, in the past seven days, SOL still lost 6% of its valuation.

It is critical for the cryptocurrency to break above this ascending triangle as there are not that many days left for it to do so. Should it manage, then its price will likely enter a much-needed rally to bring back attention and buyers. Any breakdown from the key support of $44 will likely take Solana back to the support at $35.

Looking ahead, expect to see the volatility increase for Solana as it approaches the apex of this formation. By counting the number of days left within the triangle, we can see that SOL has around another week within the triangle before a major break becomes much likely happen.

With Ethereum expected to transition to Proof of Stake in September, there is a lot of speculation about what will happen to all those miners currently mining ETH. Vitalik, the founder of Ethereum, recently stated (July 21st) that one option could well be for them to move to Ethereum Classic.

After Vitalik’s statement, ETC’s price shot up from $25 and topped at $45. Soon after that, the cryptocurrency entered a pullback, and in the past seven days, ETC lost 10% of its valuation. Nevertheless, the price found good support at $34, which could act as a pivot towards the key resistance at $48.

Looking ahead, with the merge approaching for Ethereum, proof of work networks such as ETC are expected to perform quite well as attention moves to the alternatives. Moreover, ETC broke its massive downtrend set in May 2021. This is a major change in the price action and gives a strong bullish bias.

I have a 128-bit input-block and the corresponding cipher-block given. Additionally I have the last round-key given. Is it now possible to get (calculate) the associated cipher-key? I already implemented the normal key-schedule with the rcon to generate the round-keys out of a cipher-key (like on wikipedia: https://en.wikipedia.org/wiki/Rijndael_key_schedule), but it didn’t help me much for::Listen

I have a 128-bit input-block and the corresponding cipher-block given.
Additionally I have the last round-key given.
Is it now possible to get (calculate) the associated cipher-key? I already implemented the normal key-schedule with the rcon to generate the round-keys out of a cipher-key (like on wikipedia: https://en.wikipedia.org/wiki/Rijndael_key_schedule), but it didn’t help me much for the other way…
Ist the AES Key Schedule easily invertible? I’m a bit baffled now because i thought it would be.

Thanks in advance for your answers.