Prominent DeFi protocol Bancor suspended its Impermanent Loss Protection program, citing “hostile market conditions” and “manipulative behavior” as the main causes behind the action. Assuring users and investors that it’s only a temporary measure, Bancor noted that all funds on the protocol are secure, and trading remains active on all liquidity pools.

As the months-long selloffs have shown no signs of reversal, many DeFi protocols have fallen deep into the crisis mode due to liquidity strains as investors withdraw funds from liquidity pools.

IL occurs in DeFi when the value of the staked assets changes relative to their initial value during the deposit time due to external market conditions. When launching its Bancor Version 3 earlier this year, the protocol refined the protection mechanism, positioning it as a special feature distinguishable from other DeFi competitors.

According to the official blog post, the bold measure aiming to “protect the protocol and its users from potentially manipulative actors” will be lifted once the market stabilizes again. However, the protocol did not unveil a specific timeline for such an extreme measure.

The decentralized exchange calmed its users that they could continue receiving yields for their staked assets during the turbulent period and withdraw funds with IL protection once the feature is reactivated. The statement reads:

“Withdrawals performed during this unstable period will not be eligible for IL protection. Users who remain in the protocol will continue earning yields and be entitled to withdraw their fully-protected value when IL protection is reactivated…

Deposits are currently not accepted to prevent confusion via direct contract interaction where the information on paused protection is not visible.”

The abrupt change of policies came as a response to the rewarded BNT getting consistently dumped in the past 18 months, leading the asset’s price to slump. At present, BNT is trading at $0.53, around 95% down from its 2021 peak.

The team paused the feature to prevent BNT from continually plunging. This has to do with IL compensations in BNT to users, increasing the supply of such an asset and thus facilitating the token’s price decline. In addition, the team cited “the recent insolvency of two large centralized entities who were key beneficiaries of BNT liquidity mining rewards” as partly responsible for exacerbating the situation:

“To cover their liabilities, these entities have rapidly liquidated their BNT positions and withdrawn large sums of liquidity from the system, while an unknown entity has opened a large short position on the BNT token on an external exchange.”

Prior to Bancor’s latest move safeguarding its native token, Babel Finance had already joined Celsius in pausing withdrawals due to liquidity pressure. As the crypto industry is witnessing the worst selloffs in years, some firms are in deep trouble financing their loans, and a flood of liquidations has occurred to famed digital asset hedge funds like Three Arrow Capital (3AC).

In Bancor’s case, the protocol said it had identified “anomalies” through its on-chain data, suggesting that more than one major participant has been actively shorting the token.

Is Flow a better buy than Cardano today? 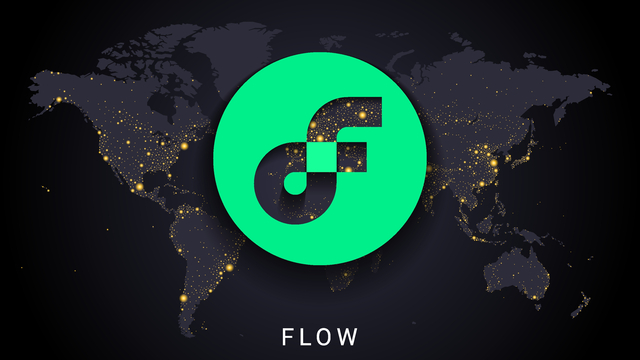 From a technical analysis perspective, FLOW is a better bet short term

The cryptocurrency market is bearish at the moment, so everything is in the red. While buying any top crypto today has significant odds of long growth term, it’s not the case in the short term.

In this context, between Cardano and Flow, Flow is a much better trade in the short term.

In the past 72 hours, Flow FLOW/USD buying volumes have risen. On 26th June 2022, FLOW dropped slightly before making a double bottom and rallying again. This indicates that bullish momentum is on the rise, and it could keep rallying going into the future. If FLOW can push through resistance at $1.75, it could easily test $2 or more in the short to medium term. 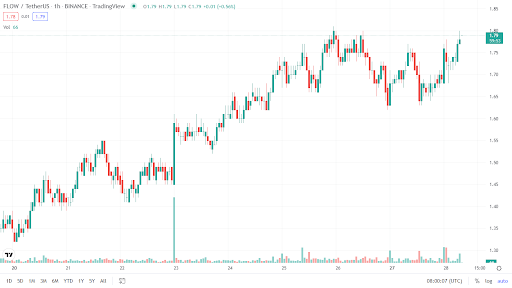 Cardano ADA/USD has been bearish for more than 72 hours. In the last 24 hours alone, Cardano has been making lower lows, an indicator that sellers have crashed every attempt by bulls to retake the market.

When writing this article, Cardano bulls attempted to retake control, but volumes were low. If bulls can push Cardano through the day’s high of $0.489, it could break out of the current bearish trend in the short term. 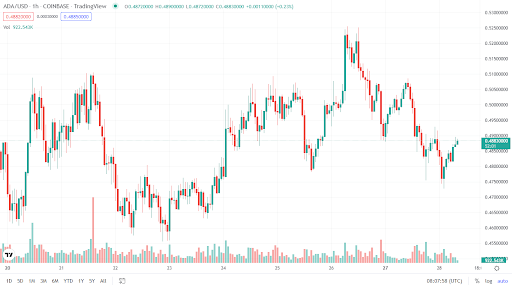 However, with buying volumes low and the broader market overall bearish, the odds seem low for Cardano to pull off such a move in the very short term. Besides, no major news is coming up anytime in the next couple of weeks.

FLOW holds much more promise in the short term than Cardano. The charts show strong buying momentum, while Cardano is stuck in a bear trend with low buying volumes.

That said, the two cryptocurrencies have a lot of promise in the long run – the fundamentals are in their favor. Cardano is one of the most promising platform blockchains in the market today, thanks to its mix of security, decentralization, and scalability. The recent launch of Cardano smart contracts has added to its intrinsic value, and as adoption grows, Cardano’s price is likely to go up as well.

On its part, FLOW is one of the fastest-growing smart contracts cryptocurrencies in the market today. Today, FLOW has a wide ecosystem of Web 3.0 projects building on top of it, and the numbers will only rise over time. The same will reflect in the price of FLOW over the years.

The post Is Flow a better buy than Cardano today? appeared first on CoinJournal.