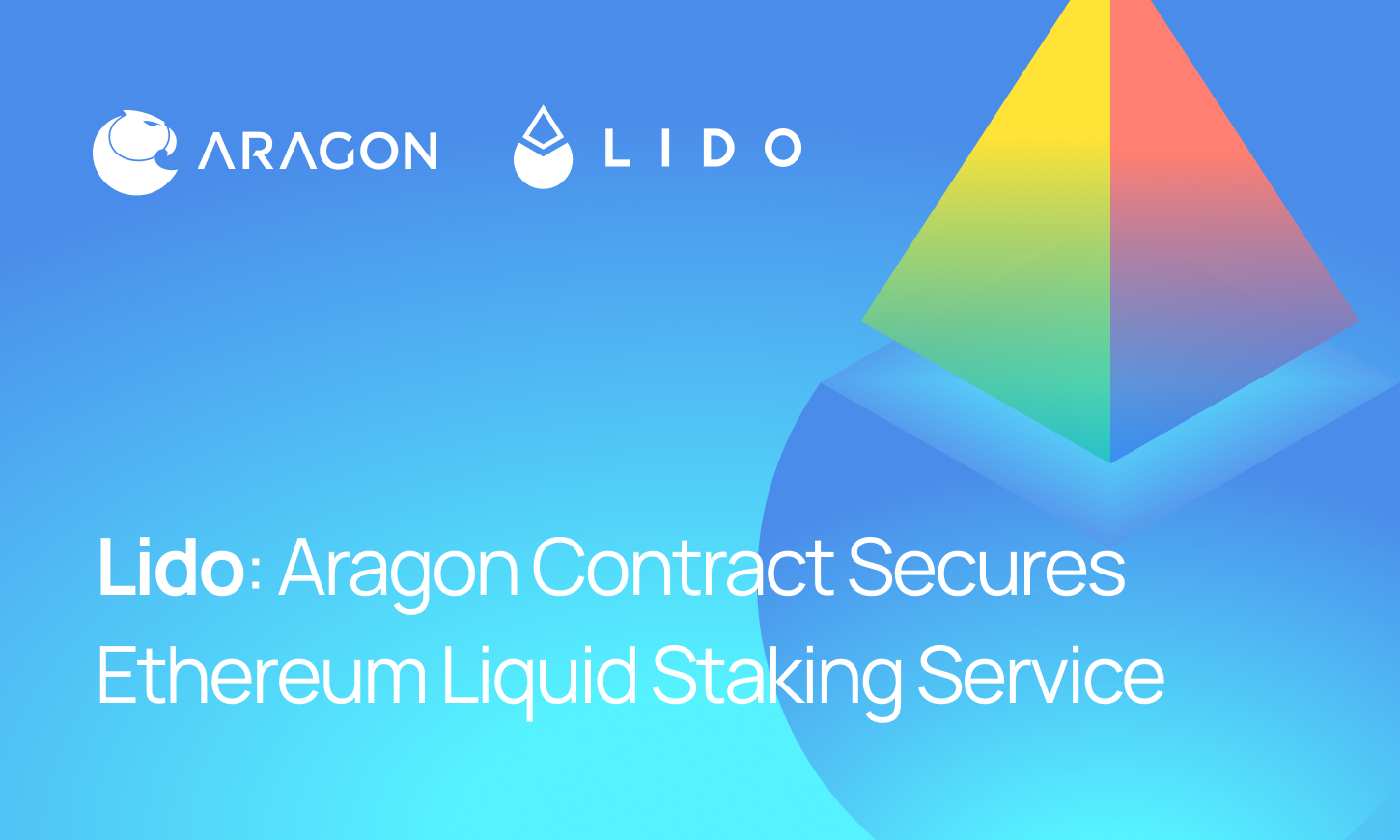 Lido provides a simple and secure way to earn rewards on the Ethereum Beacon Chain, without the need to run or maintain hardware.  As a liquid staking service it secures approximately $4.9 billion of value locked as of July 2022.

With so much at stake (pardon the pun), Lido set up an Aragon DAO from the outset in order to community-manage this critical protocol for the Ethereum ecosystem.

Today, Lido is one of the most complete implementations of AragonOS, using the full Aragon suite, as well as building their own tools on top of the open source framework. Let’s dive into the details.

What does Lido do?

Founded in early 2021, Lido is a liquid staking service that allows you to stake your ETH in exchange for stETH, a staking derivative. Staking is an action asset-holders take on Proof of Stake chains to secure the network. By staking your assets, you’re putting your funds in a contract that runs validators. Think of staking as putting away your money to earn a yield on it, like an investment.

The problem with staking is once your assets are staked, they’re locked away. But, with Lido’s liquid staking approach, you get something in return for your staking: a staking derivative. This derivative is a representation of the tokens you staked, and can be used in DeFi for borrowing, lending, and depositing.

Lido has radially increased access to staking in the Ethereum ecosystem. Without Lido’s services, ETH holders with less than 32 ETH would not be able to stake their tokens and secure the Ethereum network while earning rewards.

How does stETH work?

stETH is the staking derivative of the ETH you deposit in Lido. For each ETH you stake, you receive one stETH in return. stETh is minted when you stake ETH and burned when you unstake it.

What is Lido DAO responsible for?

The goal of the Lido DAO is to maintain and improve the Lido protocols.

Some of the Lido DAO’s responsibilities include deciding on key parameters for the protocol and executing protocol upgrades. For example, the DAO community has control over levers such as changing the fee that Lido takes from staking rewards, or changing how the income from that fee is distributed between treasury, insurance, and node operators. This means the key decisions that govern how the protocol works are fully decentralized and directly in the hands of the DAO community, with no middlemen or multisigs in the process.

How is the DAO governed?

The Lido DAO uses the LDO token to vote on decisions. They use token-weighted voting, meaning the more tokens you have, the more voting power you have.

The strategic decisions affecting the protocol are voted for on-chain using AragonOS. Meanwhile, allow-listed operational decisions (such as making regular payments to contributors) run offchain and are executed inside EasyTrack, an optimistic governance tool built by Lido. We’ll cover more on EasyTrack below.

How does Lido use Aragon?

Firstly, Lido uses Aragon for Lido DAO. Voting is used so that the community can directly govern and change the parameters (levers) of the protocol; Finance app is used for one-time payments; Tokens app is used for vesting schedules; and Agent app is used to interact with external contracts.

Secondly, the Lido protocol itself is an Aragon app. stEth leverages the Aragon ACL (Access Control List) for powerful permission management. Overall, this means that the entire total value locked of Ethereum on Lido is running through Aragon contracts, thanks to Aragon’s security.

“We were incredibly surprised by the power and security of the Aragon ACL – when setting up Lido, it saved our development team more than six months of development time” – Victor Suzdalev, Lido core governance team.

What has Lido built on top of Aragon?

While Lido started in December 2020 with the standard set of AragonOS functionalities, the team gradually added new mechanisms to improve and safeguard governance due to Lido’s huge value.

Firstly, the team built EasyTrack, an optimistic governance mechanism to more efficiently pass uncontentious proposals. With EasyTrack, operational proposals automatically will pass, unless they are challenged. This reduces the need to vote on every decision.

Secondly, the team implemented their own notification system for voters participate, which has raised voting participation levels (typically to around 6-8% of tokens voting, higher than many other DeFi protocols).

You can follow along with what the Lido team continues to build on top of Aragon’s open source framework in the Lido DAO github.

If you would like further assistance building your DAO, you might want to check out our DAO Experts Program and discover unique service provider solutions for your needs.

1 ETH bounty for the person who gives me the deciding clue to solve this riddle. Situation is as follows: I deployed a ERC-20-Token, added liquidity to Uniswap v2, then called functions to change the max transaction amount and max wallet amount and renounced ownership of the contract thereafter. As I quickly noticed, I made::Listen

1 ETH bounty for the person who gives me the deciding clue to solve this riddle.

Situation is as follows:

I deployed a ERC-20-Token, added liquidity to Uniswap v2, then called functions to change the max transaction amount and max wallet amount and renounced ownership of the contract thereafter. As I quickly noticed, I made a massive mistake – I forgot to add the decimals for the uint256 inputs for the max transaction / max wallet, which now has resulted in the maximum transaction and wallet amount becoming 1 token (actually I tried this out and sending 1 doesn’t work, but sending 0.999999… works). Obviously, the contract can’t be changed anymore and the project is basically paralyzed.

Now that I want to relaunch this project with a proper contract, obviously I somehow need to get my hands on that liquidity. Casually removing liquidity isn’t an option, because there are hundreds of millions of tokens in the liquidity pool – the max tx/wallet is only 1 token.

I now came to the idea to migrate the LP to Uniswap v3. There, I can select a price range for the token – if the min price is significantly higher than the current price, in theory I could get refunded the ETH that is into the LP, leaving all of the other tokens in the LP. I can approve the migration function, but ultimately it doesn’t let me execute it – I assume a problem could be here, that usually when migrating to v3 you get refunded at least a small portion of both tokens because of rounding issues – although though faulty design of my contract I can only receive an amount of token that is less than 1. I already split up my LP token so that my main LP holding contains a round number of the token so maybe there is no refund of the token needed and I get only a refund of one side of the LP – but I still can’t press the button to execute the function.

Is there any way to get the ETH of the liquidity pool back, maybe through migrating to v3 using a specific way / any other options?

I am thankful for any help.

The deciding advisor receives a bounty of 1 ETH!