THE SUPREME TEAM: Memecoins Are Surging Again, But Why?

Shiba Inu leads the way making it the alpha of the other dog-themed memecoins.

Shiba Inu And Doge Up Again 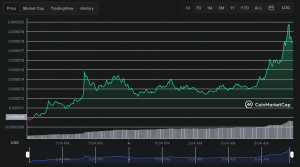 While Bitcoin alternatives struggle in the last 24 hours, Shiba Inu (SHIB) and Dogecoin (DOGE) have managed to rise.

In particular, Shiba Inu is up over 80%, trading in the $0.0000159 USD range. Shiba is currently 27th in market cap, with over $7 billion invested into the doge offshoot.

Most impressively, it’s by far the best performing coin in the top 100 the last 24 hours. Its closest competitor being the pseudo-memecoin Internet Computer Protocol (ICP), which is up only 12%.

Dogecoin, the OG memecoin, isn’t enjoying the same level of success as Shiba Inu. DOGE was over 10% last night, but has since fallen a bit. But, it still up a hefty 7%. Compare that to more serious projects like Solana (down 1%) and Terra (Down 4%).

Despite the not as impressive 24 hours from Doge, it is still far ahead of Shiba Inu overall. DOGE still finds itself in 10th place overall with a market cap of over 31 billion USD.

As always, the reason for the memecoin pump is an Elon Musk tweet. This time, Elon tweeted out a photo of his admittedly adorable Floki, who appears well-worth the trip to Japan.

Obviously, since we are in hell, there is now a Floki token. Not sure why you need a ripoff of a ripoff of a satirical cryptocurrency. But, that’s where we are at.

Though, apparently, there is a “usecase” for Floki.

We are excited about changing millions of lives together with Million Gardens Movement through this partnership. pic.twitter.com/l9fdxk0CVl

Not sure how these dots connect. But, it’s interesting to see that the Musk family ties to memecoins are growing past “for the lulz.”

Dogecoin did have its own run back in the spring. Doge showed it could move without Elon Musk tweets. But its price rise did end with Elon Musk’s SNL appearance. Since then Doge is down over 60% from its all-time high of $0.74 USD.

Like DOGE, Shiba Inu is down from its all-time high of $0.000038 USD, just over 50%. Coinbase  added Shiba on September 14th after a long delay due to “technical issues.” Coinbase originally announce Shiba’s addition back in July.

Doge’s addition to Coinbase went a lot smoother back in June. It was added from Coinbase Pro to Coinbase within a week.

It’s unclear what other catalysts are out there for Shiba and Doge. Other than another Elon Musk tweet.

The post Memecoins Are Surging Again, But Why? appeared first on CryptosRus.