Meta announced that it was launching a designer digital clothing store that will allow users to purchase pieces of clothing for their avatars in its metaverse. The company believes that clothing and other accessories will become an important part of the users’ identity expression and that this will entice them to spend money on digital clothes that will be wearable on all Meta’s apps, including Facebook and Instagram.

With the rise of the metaverse, an alternative and digital take of our world, companies have begun to include industries like clothing to capitalize on the earnings that the need for expression of metaverse users can produce. One of these companies is Meta, which has recently announced the launch of a digital clothing store, named the “Meta Avatars Store,” that will allow users to purchase clothing of different brands to dress their metaverse avatars.

The store, which will be rolling to different markets this week, will feature digital designs created by Balenciaga, Prada, and Thom Browne, and will be available for Meta’s avatars on Facebook, Instagram, and Messenger. The pricing for each one of the pieces of clothes available has still not been revealed.

Meta’s bet is simple: the company believes that the metaverse will grow so big in the coming years that the need for these digital items will also grow with it. That is why the company pivoted to a metaverse-driven business earlier this year. About the relevance of these items, Mark Zuckerberg, founder and CEO of Meta, stated:

Digital goods will be an important way to express yourself in the metaverse and a big driver of the creative economy. I’m excited to add more brands and bring this to VR soon too.

With VR, Zuckerberg is likely referring to Horizon Worlds, Meta’s flagship metaverse app, that can only be enjoyed by owners of Meta’s Quest, a line of VR headsets. it is likely that users of the platform will also be able to wear these digital items in Horizon World.

However, according to experts, Meta’s voyage to entice users to step into the metaverse will not be an easy one. Zuckerberg has already recognized that this early pivot to metaverse will cost them. In May he stated that this change will make the company lose a “significant amount of money” during the next three to five years.

What do you think about Meta’s launch of its digital clothing store? Tell us in the comments section above.

Basic Attention Token (BAT) Price Prediction – July 5
There have been indications suggesting the BAT market activity attempts to swing high against the US economy. In the last 52 weeks of trading, the price has experienced a low of $0.2608 and a high of $1.92. 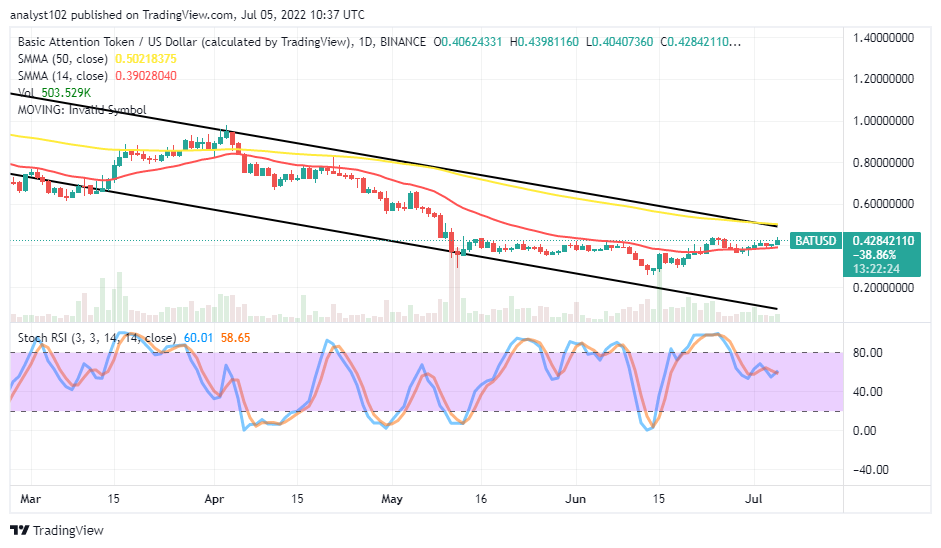 BAT/USD – Daily Chart
The daily chart showcases Basic Attention Token market operation attempts to swing high as it trades pairing with the US Dollar on the buy signal side of the smaller SMA. The 14-day SMA indicator is underneath the 50-day SMA indicator. The Stochastic Oscillators have initially moved southbound out of the overbought region, trying to oscillate around the 60 range. Variant smaller bullish candlesticks have featured to affirm a buying force is ongoing.

Will there be sustainable ups in the BAT/USD market operations?

There has been a promising buying force in the BAT/USD market operations as the crypto economy attempts to swing high presently. Long-position takers should not over-leverage their orders. In other words, a smaller lot size is technically ideal. A sudden reversal movement from above of the 14-day SMA trend line purposely to breach it southward will negate the possibility of sustainable ups on a long-term outlook.

On the downside of the technical analysis, the BAT/USD market short-position takers may have to wait for the trade reactions around the trend line of the 50-day SMA before considering a new sell order. An aggressively breaching process around the indicator to the upside will nudge the trading zone into a higher spot to set for more recovery of momentums afterward. 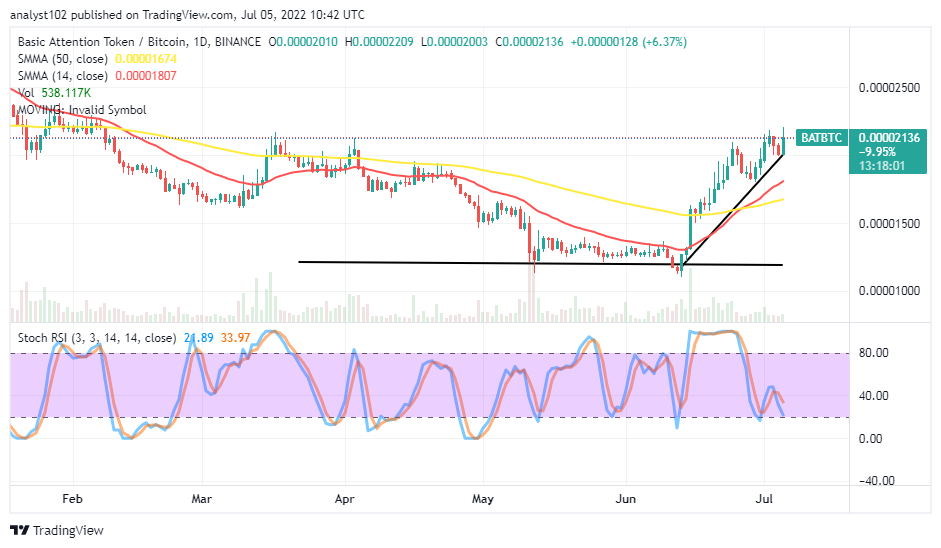 Basic Attention Token has continued to push higher than the previous days’ sessions against the trending force of Bitcoin. The cryptocurrency pair market attempts to swing high above its SMA trading indicators. The 14-day SMA has intercepted the 50-day SMA to the north side. The Stochastic Oscillators are in the ranges of 40 and 20. The current candlestick features bullish to denote the situation controlled by buyers at the expense of the bears’ weaknesses as of writing.