New York Attorney General Letitia James has ordered two cryptocurrency lending platforms to shut down and requested three other platforms to answer questions regarding their activities immediately. The letters to the companies published on the attorney general’s website indicate that the two platforms are Nexo and Celsius Network.

In New York, lending platforms must register with the Office of the Attorney General (OAG) to operate in the state or offer products to its residents. The announcement details:

The notice explains that crypto lending platforms “are essentially interest-bearing accounts that offer investors a rate of return on virtual currencies that are deposited with them.” Under the Martin Act, “The nature and function of the most common virtual currency lending products or services demonstrate that they fall squarely within any of several categories of ‘security.’”

The NYAG website also published cease and desist letters to the two lending platforms in question. While the letters were redacted, the file names indicated that they were sent to Nexo and Celsius Network. Three other unnamed firms received a letter asking for information about their activities.

Nexo tweeted after the news broke: “Nexo is not offering its Earn Product & Exchange in New York, so it makes little sense to be receiving a C&D for something we are not offering in NY anyway. But we will engage with the NY AG as this is a clear case of mixing up the letter’s recipients. We use IP-based geoblocking.”

Cryptocurrency platforms must follow the law, just like everyone else, which is why we are now directing two crypto companies to shut down and forcing three more to answer questions immediately.

Last month, Attorney General James shut down the cryptocurrency trading platform Coinseed after filing a lawsuit against the company earlier this year. In February, she announced an agreement with Bitfinex, Tether, and related entities that ended their trading activity in the state of New York and imposed an $18.5 million penalty on the companies.

What do you think about New York Attorney General Letitia James taking action against unregistered crypto lending platforms? Let us know in the comments section below.

El Salvador Doubles Down And Buys The Dip As Market Crashes

El Salvador Buys The Dip For The Fourth Time

In case you missed it last night, Bitcoin fell over 20% amid instability in the markets likely compounded by the growing fear around the Omicron variant. However, the recovery has been decent, with Bitcoin getting back up near $50,000 since plunging around 10pm to $41,000 last night. BTC is now settling around $48,000, showing signs of life.

As a side note, Metaverse tokens have held up well, too. Both Decentraland and Sandbox have suffered the least compared to others in the top 100–down 3% and 6% respectively in the last 24 hours at press time, showing there is still demand for the metaverse. 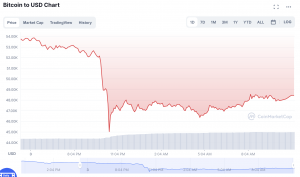 But El-Salvador wasn’t buying the metaverse dip. In a show of Saylor-esque confidence, El-Salvador, specifically President Bukele, announced on Twitter that they had bought the dip early this morning. Adding another 150 Bitcoin to their growing reserve.

Subsequent to that buy, Bitcoin fell even further, and Bukele added that they “missed the bottom by 7 f***ing minutes.” Justin Sun, the head of Tron decided he would try and match the “CEO of El-Salvador” by buying 100 BTC himself at an average price of $47,627 per BTC. It appears they both missed the bottom, however as BTC stands now El-Salvador’s buy and Sun’s too are both slightly in the green.

Recommended: Take Me Down To Bitcoin City

This 150 coin purchase by the small Central American country is another digital cornerstone to the ambitious foundation of their recently announced ‘Bitcoin city.’ The plan  centers around a “bitcoin-backed bond offering of $1 billion in tokenized bonds via Blockstream’s Liquid Network sidechain.” 500 million will be used to build the city and 500 million more will be used to buy more Bitcoin.

The citadel includes a Bitcoin mine, powered by Volcanic energy from the nearby Conchagua volcano. Blockstream CSO Samson Mow expects big returns for El-Salvador from the investment after 10 years, 146% APY to be exact, which would put Bitcoin at a price of $1 million USD per coin.

Bukele is dubbing this city the modern version of Alexander the Great building the city of Alexandria in Egypt during his reign, saying: “”If you want bitcoin to spread over the world, we should build some Alexandrias.” Bukele has faced scrutiny for his Bitcoin zealotry from power brokers worldwide, including the IMF and World Bank.

However, he has walked the talk since the country announced they would accept Bitcoin as legal tender this summer. For example, El Salvador has built “20 ‘Bitcoin schools’ and a veterinary clinic from bitcoin proceeds.” Moreover, he has not dragged his feet on the volcanic mining, either, it wasn’t just a meme to pump BTC. The video below is a good example of what is happening.

For a country wracked by economic stagnation and financial corruption, moving this fast is a monumental achievement for the country, and for any country for that matter. As of Oct 1, El-Salvador mined its first bitcoin with volcanic energy. El-Salvador will stack sats from mining and buying with dozens of volcanos in the country.

So while people will call Bukele’s Bitcoin city a fantasy, what is happening, in reality, is the country has become industrialized, modernized, and richer thanks to Bitcoin. When nation-states are buying the dip, panic should be the last words that come to mind.

The post El Salvador Doubles Down And Buys The Dip As Market Crashes appeared first on CryptosRus.