This is not clickbait, this is not satire. U.S. officials have been in discussions to mint a ‘trillion-dollar platinum coin’ to avert raising the debt ceiling, giving the government carte blanche to spend as much money as they want without cutting budgets or raising taxes. The infamous Nobel prize-winning economist Paul Krugman, who once said the internet would amount to nothing, has even penned an op-ed in the New York Times saying President Biden should ‘ignore the debt limit and mint a $1 trillion dollar coin’. 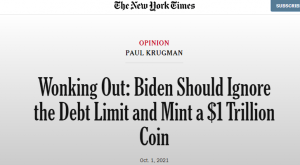 There is a famous saying that goes: “History repeats itself, first as tragedy, second as farce.” That saying has never been more true than with this notion that minting a “trillion-dollar platinum coin’ will somehow solve our economic peril. What is the difference between that and printing a $100 trillion dollar note, like the country of Zimbabwe did in 2009? It is pure insanity, and because we’ve already seen this tragedy play out over the centuries, the idea is certainly a farce.

When Zimbabwe rolled out their $100 trillion dollar note, they had inflation of over 231 million percent, according to the BBC. And when they started taking 0’s off the notes, inflation still ran rampant, and the country went through, and still is going through, economic calamity. Apparently, our leaders are happy to take the Zimbabwe route, and by just minting a coin with the word ‘$1 trillion’ engraved, think our problems of inflation will magically be solved. This is why we need Bitcoin and other stores of value. 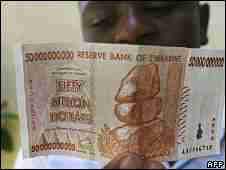 Axios, a prominent online news-site wrote an article on the proposed coin, giving the idea credence saying: “An increasingly vocal chorus of commentators is saying that the U.S. Treasury should #MintTheCoin — issue a small platinum token, give it a face value of $1 trillion and deposit it at the Federal Reserve.”

They go on to say that if successful, it would “prevent the potentially catastrophic debt default that, thanks to Congressional intransigence on both sides of the aisle, is looming fast.” This is all due to the US raising the debt ceiling. Which is a “legislative limit on the amount of national debt that can be incurred by the U.S. Treasury, thus limiting how much money the federal government may pay on the debt they already borrowed.”

Because we never actually have the funds to pay for the massive spending endeavors the government and lobbyists desire, we have to raise this debt ceiling and take on more debt, by either issuing more government bonds or printing more money. This is why every year you may hear about an ominous government shutdown unless we raise the debt ceiling to avoid a “disaster”. Because of this ‘kicking the can down the road’ mentality of our feckless politicians, we have raised the debt ceiling 78 times since 1960.

For that, we have been rewarded with a national debt that has skyrocketed far past 100% of our GDP, setting the stage for a total failure of our system, and because of this, our politicians want to say ‘to hell with this debt ceiling and figuring out how we are going to pay for stuff, let’s just mint a trillion-dollar coin’. 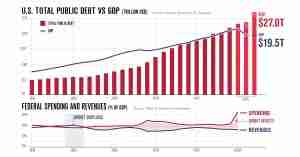 Some of the lunatics backing this plan are “Nobel laureate Paul Krugman; economist Dean Baker; former Mint director Philip Diehl; members of Congress including Rashida Tlaib and Jerry Nadler; and others including Hayes Brown and Zachary Carter.” Proponents of the plan mention that you shouldn’t worry about runaway inflation from such a proposal because it “won’t be spent all at once in a lump sum. It’s there just to pay for spending already authorized by Congress.” And for more ‘re-assurance, if inflation began to rise “beyond targets set by the Fed, the government would start selling bonds to offset the new money.”

The problem with this absurd circus is that of course minting a platinum coin stamped $1 trillion doesn’t mean we suddenly have the money to pay for government spending, we don’t. All this is doing is giving the feds full authority to spend endlessly, raising the debt to infinity and offset the inflation by…you guessed it, issuing more debt to bankers in the form of government bonds.

We really are living in a farce. It is all a giant shell game and facade. The debt will keep climbing into the hundreds of trillions, and the monopoly game will continue until the wheels finally fall off. This is why we need crypto–to take our wealth back from those looking to destroy it from their own greed, malfeasance, and incompetence. Imagine if you could avert a default on your debt by minting a million-dollar coin, wouldn’t that be nice?